Video to Lee Hazlewood and Nancy Sinatra song "Jackson". Nice.
Posted by Jack Velvet at 9:35 AM No comments:

Trailer to the Epic film Ubelanga by Jack Velvet. Ubelanga was a gigantic 3 week, 8000 mile roadtrip across America in a large open car. The original footage has recently been re-edited. More excerpts from this modern cinematic masterpiece coming soon.
Posted by Jack Velvet at 12:44 PM No comments:

Intro to the Epic film Ubelanga by Jack Velvet. Ubelanga was a gigantic 3 week, 8000 mile roadtrip across America in a large open car. The original footage has recently been re-edited. More excerpts from this modern cinematic masterpiece coming soon.
Posted by Jack Velvet at 9:32 AM No comments: 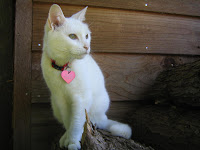 It is with great sadness, that I have to announce the passing of a legend among cats. The Velvet Pussycat died Saturday February 23rd at approximately 1 pm. He lived a long and storied life, and was at least 16 years old. He and I had many great adventures together. He had an exceptional ability to predict weather, and would sometimes dress up as a Venice gondolier. He is sadly missed by all of us here at the Eco-Pod Complex.

I first met the Velvet Pussycat in May of 1993 at my mother Barbie Velvet's house in NDG, a district on the west side of Montreal. He might have been about a year or two old. He had recently taken to living under the front porch of the house. At first we thought he was just passing by and that he had somewhere else to live. After a time, we found out he was actually spending all of his time under her porch. So, we started feeding him, but my mother did not want him living in the house, as she was not ready to take on a cat just at that time.

I was about to drive across Canada from Montreal to a new life in Vancouver, and then start off in BC by living with my sister and her family for a short time. Her kids had some allergies, and because of that, I thought that even the possibility of bringing a cat along was a complete non-starter. I had tried to find some people to adopt the Pussycat, but had thus far not succeeded. I felt a responsibility for him because of the impending move, and because he was proving to be a very nice cat. So, I phoned my sister and asked what she thought of the idea of me arriving with a cat? To my great surprise, she said she was open to it.

And so, the die was cast. Rather than be a stray who was with me for a month or two, this was to become one of the two great cats of my lifetime, (one black one white - go figure). The Velvet Pussycat and I drove across Canada in August of 1993, and then lived together in several places in and around Vancouver over the next 15 years. He was an ideal companion and an exceptional gentleman at all times.

11 or 12 pounds in his prime, one of his many claims to fame was that he had slept with over 25 women!

This past Saturday, I had gotten up about 8 am and went up the stairs. As usual the Pussycat was sitting at the top of the stairs waiting for me to pass by, he would then wake up, immediately start meowing for food, and I would then go feed him. I fed him and went about my morning. Though he had been a bit sick earlier in the week, he had rallied and seemed in reasonable shape. Around noon, I left the house to go to the dentist and get a wisdom tooth removed. Miss Pinky and I were gone for about 1 and a half hours. I got the inflamed wisdom tooth removed (no small feat) and got back home highly addled and in extreme pain. Soon after we got back, Pinky called to me and said "Jack, come quick, The Pussycat is dead." I raced down the hall quickly, and found him lying on the bed, looking comfortable and lifelike, perfectly preserved. His eyes were open and clear. Even in death he still looked good. He must have died soon before we got back from the dentist as he was still warm. Pinky and I petted him for quite a while and both had a good cry together, and said how much we would miss the little guy. It was very sad. He has been buried in a choice spot just outside our bedroom window at Rancho Relaxo.

The Velvet Pussycat, he was a prince among cats, and he is missed.
Posted by Jack Velvet at 4:21 PM 2 comments:

Funkstar Deluxe * As heard on Jack's radio show.
Posted by Jack Velvet at 10:16 PM No comments:

Does anyone remember this crazy show?
Posted by Jack Velvet at 6:26 PM No comments: 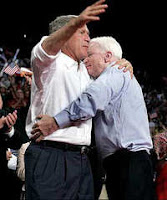 Shown above, a love-struck John McCain, gladly accepts George W. Bush's recent proposal! A November 2008 wedding is planned. The newlyweds will live in either Crawford Texas or Washington DC, depending on how the election goes.

Said the jubilant McCain, "he likes me, he really likes me!"
Posted by Jack Velvet at 3:06 PM No comments:

The Ventures do Hawaii-50!!

This is a video for the Ventures doing Hawaii-50
and is super stylish.

Book'im Danno!
Posted by Jack Velvet at 3:43 PM No comments:

Posted by Jack Velvet at 1:06 PM No comments:

Posted by Jack Velvet at 9:49 AM No comments:

I came home a few days ago, and noted that there were a few voice mails waiting. Looked like they may have been there for a while. One was for my mother, Barbie Velvet, and I promptly forwarded it on to her in Vancouver. The second message surprised me. It said "This is Marcel Gagnon calling, I will call back another time". He did not leave a phone number. Luckily my phone has numerous space age features, including caller id, and I was able to easily get the number.

Marcel Gagnon was one of my father's best friends, top salesman, and also a business partner in his clothing manufacturing business in the 60s and 70s. The last time I spoke with him was about 20 years ago in Montreal. As one of my dad's best friends, he was basically like an uncle to me when I was growing up.

Eddy Velvet was a successful clothing manufacturer in Montreal for about 30 years. In 1978, he left Canada and his company behind in Montreal, and headed off to sail around the world with his girlfriend on the 42 foot schooner Belle Poule. He did not quite make it around the world. But he did get half way, ended up in Australia for about 5 years, and then moved to the French island of New Caledonia in the South Pacific, about 1000 miles north east of Australia, where he lived for the next 18 years, and rebuilt his fortunes.

In 2003, we learned that Eddy was no longer able to manage his affairs, and it fell to me to go and get the old guy, and pull the plug on his independent life. He was 76years old. I had to travel to New Caledonia, sell off all his assets, pack him up, and return him to Canada. A huge job. He had been out of Canada for 27 years. He had two houses to sell, and the French system of property sales and transfer is a very slow moving monster. There are no firm closing dates as we have here. I thought I would be there for 1 month and I ended up having to stay for 6 months, to make sure all the sales closed properly!! Very slow system. Ultimately we prevailed and flew home to Canada. 6 months I had to stay there. It was hell. A lovely tropical hell, but hell nonetheless. In New Caledonia, you can not buy relish. 20 kinds of mustard, and no relish! How are you supposed to eat a bbq burger without relish? I dont even think the French have a word for relish. This is sad. I digress.

Eddy Velvet returned to Canada in 2004, and now lives at home with me. I have been taking care of him since that fateful day in 2003 when I was sent to get him. This works reasonably well with my lifestyle as I work from home anyways.

Some time soon after Eddy's return, I tried to track down his old buddy Marcel, as I was sure they would love to talk. I looked him up online and as you might imagine, there are a lot of Marcel Gagnons in Quebec... I called up a few of them, but to no avail, and I did not find him. I was not even sure if Marcel was still alive, as when I last spoke to him he was a big drinker and smoker. I had basically given up on finding him.

So when I got Marcel's phone message, I was naturally pleased to find out he was still alive, and that the two old buddies would finally be able to talk after 30 years. I phoned Marcel's number and got a machine, left a message. It was Super Bowl Sunday. He phoned back after the game, but I missed his call. So yesterday, I called him back. He was very happy to get my call. Turns out he gave up smoking and drinking years ago and is still super sharp mentally. A stroke or two have cost Eddy Velvet a fair bit of his memory. So it is always interesting to me to find people who knew Eddy Velvet in his prime, and can illuminate some of the darker corners of his adventurous life.

I brought Marcel up to speed on Eddy and my current situations, and then I put him on the line with Eddy. They were both very happy to talk. Eddy always gets all teary eyed at this sort of stuff. Turns out Marcel is quite a bit younger than Eddy. Marcel is 71, and Eddy is 80.

I asked Marcel about all sorts of stuff from back in the day, and it turns out his memory is as sharp as a tack and he still stays in touch with a lot of people from his old days in the "Schmata" business. His wife had died about 20 years ago. His two boys, Ricky and Paul both live nearby, and are doing well. Marcel is retired and lives in a condo in Montreal. He is also the administrator of the condo complex just to keep a bit busy at something.

Eddy and Marcel did a lot of business back in the day, and also got up to all sorts of crazy shenanigans. They had a great time catching up on old stories. Marcel even mentioned that he might want to visit some time this summer. That would be great. I will have to phone him back and capture more of those great old stories ad part of my ongoing research into the somewhat mysterious past of Eddy Velvet Sr.

Because he forgets things so easily, I kept asking Eddy through the rest of the day if he remembered talking to Marcel. He said he did, and kept tearing up, and saying how good it was to see Marcel. I had to remind him it was a phone call, but in any case the old guy was really happy about it.
Posted by Jack Velvet at 11:05 AM 1 comment:

Jack Velvet
Jack Velvet is a Vancouver based radio host and media producer. His radio show The Suburban Jungle is broadcast live at 101.9 FM CITR Vancouver, Wednesdays from 8-10 am. He is also Creative and Project Director for CHANNEL 88 Media Group, which provides Marketing & Media Services to help small and midsized companies build their businesses.